Note: This was originally published at the Overture Networks "Overtones" blog site at http://www.overturenetworks.com/connect-with-overture/overtones-blog/net-neutrality-part-3/. That site is no longer available.

“Net Neutrality” refers to the FCC  rules regarding the non-discriminatory treatment of services and applications.  While the basics of Net Neutrality are simple, the ramifications are broad and complex.
This blog is the third of a three-part series.

For this part, I talked to some senior people at two major service providers.  They denied being legal experts, but their roles do give them insight into the impact of Net Neutrality, and their opinions are pretty interesting.  These discussions were off the record, so I can’t name them or their employers.  To simplify this blog, I will refer to them by pseudonyms:

As discussed in Part 2 of this series, a basic assumption of the FCC was a lack of competition.
Today, many urban and suburban subscribers have a choice of two or three providers using DSL, cable, fiber or fixed wireless. Should the rules take this competition into account?

I asked Indigo about whether there was likely to be any petition to the FCC to recognize the emergence of competition.  They said probably not.  Their thinking was that the current penetration was so geographically spotty that it would be difficult for the SP to show competition and to have different policies in those areas.  Furthermore, it was unlikely that the FCC would consent to providing such specific exemptions.

Charlie pointed out that even when competition is present, it is not always equal.  For example, certain areas may have more than one wireline provider, but the differences in available bandwidth may mean that only one of the providers has a suitable service.

It looks like a lack of effective competition is and will continue to be a factor in the basis of net neutrality.

One of the assertions of the FCC was that the Open Internet Report and Order would have little or no impact on service providers.  To test this assertion, I asked the folks at Charlie and Indigo.
At Charlie the answer was answer was both “yes” and “no”:

At Indigo the answer was also both “no” and “yes” – but with a very different slant:

With respect to the future possibilities of increased regulation, I want to share Figure 1 from Mercatus that shows the growth of all US Federal regulations from 1997 to 2010. 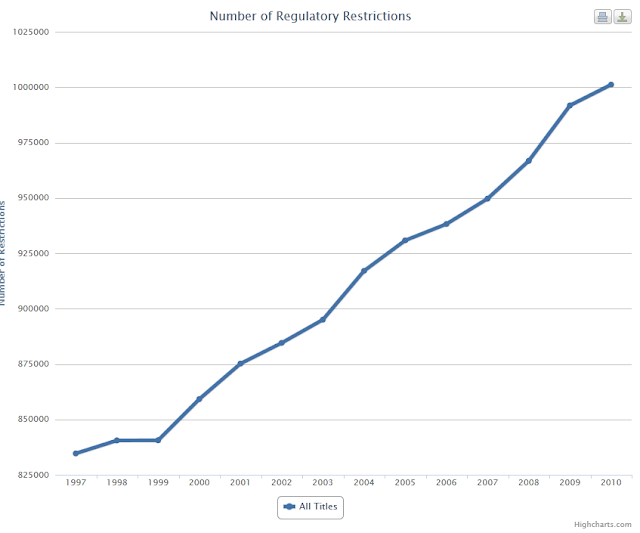 Clearly the trend for the amount of US Federal regulations is upward and to the right.  The two viewpoints above (i.e. Net Neutrality is a basic assumption versus Net Neutrality is a potential monkey wrench) reflect the two faces of the same regulatory coin.

What is Being Done?

This concern about regulatory impact is shared by a number industry players.  One example of a response is the Broadband Internet Technical Advisory Group (BITAG),  which was formed to “to discuss and opine on technical issues pertaining to the operation of the Internet, as a means of bringing transparency and clarity to network management processes as well as the interaction among networks, applications, devices and content” and to “provide the best technical information and counsel to policymakers and the public.”

Some of the work to date serves to provide a technical basis for some current and upcoming trends by the service providers.  One paper is on Large Scale Network Address Translation, which is needed to maximize the efficiency of IPv4 address usage during the transition to IPv6.  However, there is a side effect that may impair some protocols.

Another paper is on SNMP DDOS attacks.  This study describes the possible deleterious effects due to SNMP-enabled home routers in combination with malicious DDOS attacks.  The study points out that a possible remedy is the blocking of SNMP, noting that this may have a deleterious effect on business users.  We at Overture ran into this at one point when we couldn’t do some troubleshooting over our internet connection because our ISP was blocking SNMP – without clearing informing us.

The issue that we had at Overture underscores the need for accurate disclosure of management practices.

Do NAT and SNMP blocking fall under the allowance for “Reasonable network management?”  The BITAG hopes to make the case that they do so as to minimize the chance of an unfavorable ruling by the FCC.