What is Escape Velocity?

Even among physics majors, the subject of escape velocity is not well understood.  It is no surprise that many websites also get it wrong.  For example, the Apollo 11 site “One Giant Leap” says this about escape velocity:

The speed at which an object must travel in order to escape from the object which it is orbitting [sic].

I can remember watching live coverage of the Apollo missions, and the newscasters would make similar statements, which always bothered me.  I knew that gravity got weaker as you went up, and I couldn’t figure out why a certain speed was required to "break free."  As it turns out, you don’t need to achieve escape velocity in a powered ship.

Let’s do a little thought experiment.  Let’s say you are in a powered space craft with an advanced propulsion system of virtually unlimited energy (e.g. nuclear fusion) so that fuel is not a consideration (this is a physics discussion, not engineering).  You decide to start traveling towards the moon at a speed less than escape velocity.  What is going to stop you?  Where is the “brick wall” you must break through?

Gravity won’t be your problem.  It will be getting weaker the further you go.  The weight FH of the ship at a given height H is given by (See the Appendix for details of this calculation):

Where R is the radius of the earth and Fs is its weight at the surface.

Let’s look at an example of how the original weight of a ship (let’s say 10 tons) changes as you move from the surface of the Earth (height=0) to the moon (height=238,900 miles). 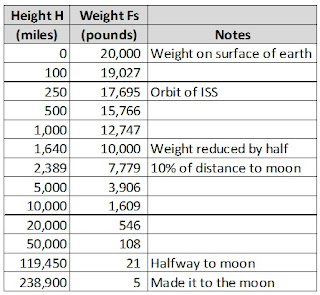 The International Space Station orbits at a height of about 250 miles.  At that height the weight of your ship has only decreased about 10%.  However, as you go up the weight really starts to drop off.  By the time you are 10% of the way to the moon your weight has dropped by more than half.  Halfway to the moon your ship weighs about 21 pounds, or 0.1% of its original weight.

As we see, if you have a powered ship and don’t have to worry about fuel, the power required to go to the moon drops off quite rapidly.  If we are going along a modest clip of 1000 mph, we will get to the moon in about 10 days, and the job will get a lot easier as we go along.

The definition of escape velocity is: neglecting air friction, how fast does an unpowered object have to be going to coast away from a celestial body, and never fall back. For example, a projectile fired from the surface of the moon at the moon's escape velocity would coast away and never fall back.
Calculating escape velocity is very straightforward using some basic calculus.  If you integrate the work required to lift a body an infinite distance away from a celestial object (say the earth), and then equate that value to the kinetic energy of a projectile, and solve for velocity you get the following equation for escape velocity (for the earth in this case):

As you can see, the value is calculated in terms of the gravitational constant G, as well as the mass (M) and radius (R) of the earth.  It does not depend on the mass of the ship or projectile. Escape velocity is a useful shorthand for comparing the size and mass of celestial bodies.  It is not a general speed limit.


Note that escape velocity is defined in terms of unpowered objects.  Our example involves a powered spacecraft of virtually unlimited energy.  Escape velocity is not relevant to our desire to go to the moon. You can go as slow as you like.

Achieving escape velocity is sufficient to get to the moon, but not necessary.  It also turns out that due to the limited energy of today's rocket fuels it is a convenient engineering practice to achieve escape velocity.  In no sense is it necessary from the standpoint of physics.

Appendix: Calculations for those who care:

The force of gravity on your ship is given by:

Note that what we call weight is the force of gravity acting on your mass.  For simplicity we will stick with weight since that is what we observe in our daily life.

What is the change in the weight as you go up? We will calculate it as a ratio of weight at a height h (FH) versus weight at the surface (Fs).

Solving for the weight at a given height FH yields:

Posted by Prayson Pate at 10:04 AM No comments: